If you’re looking for an air purifier with a suitable price, you may be wondering between IQAir GC Multigas and HealthPro Plus, the two products that are the most popular on the current market. Which one will be the best option for your family given their same power and fan number, and even price range? Let’s figure it out in the following IQAir HealthPro Plus vs GC Multigas comparison.

Differences Between IQAir HealthPro Plus vs GC Multigas

When it comes to IQAir HealthPro Plus vs Multigas, both have a compact and attractive design that doesn’t take much space and can blend in with any furniture in your house. Specifically, they share their same dimensions of 16” x 15” x 28”. However, the IQAir HealthPro Plus is challenging to move from one room to another because it weighs 6 pounds heavier than the GC Multigas model.

Besides, these models run on the corded electricity with the same 125W power and 120V voltage. Thus, it’s not easy to tell which one is more energy-efficient and electric-saving. It’s because both of them don’t consume too much electricity to make the fan, the filters, and other parts operate at their full capacity.

There are some dissimilarities between the IQAir HealthPro Plus vs. GC Multigas concerning the filters. To be more specific, each is equipped with three different kinds of filters with other functions.

The IQAir HealthPro Plus has a HyperHEPA filter to deal with bacteria, viruses, and ultrafine particles effectively. The V5-cell filter, a wide-range granular media mix, helps curb the vast diversity of odors and pollutants. Additionally, the high-capacity prefilter with a surface area of 2.8 square meters, known as the PreMax filter, can filter coarse and fine dust particles.

In terms of filtering efficiency, there is a minor difference between these two air purifiers. The IQAir HealthPro Plus can work at 99.5% filtering efficiency for coarse particles of less than 0.5 microns. It can also filter at least 99.5% of all particles as tiny as 0.003 microns to protect you against bacteria and viruses in the air.

On the other hand, the IQAir GC Multigas can stop fine and ultrafine particles up to 0.3 microns. For particles that are more or less .003 microns, this air purifier’s filtering efficiency stands at the rate of more than 95%, which is just a little less efficient than the IQAir HealthPro Plus model.

Regarding area coverage, you can use either IQAir HealthPro Plus or C Multigas air purifiers for various kinds of rooms due to their great filtering performances. However, the IQAir HealthPro Plus has a little better total system efficiency, so it’s more suitable for large areas of up to 85 square meter. Meanwhile, the GC Multigas is ideal for smaller rooms of less than 75 square meters.

Made by the same brand, these two products bear no differences regarding the noise they produce. IQAir has equipped both models with the EvenFlow diffuser to allow no noisy air outlet and no annoying draft. You can just sit back and experience the quality filtered air because it’s distributed quietly and evenly in all directions.

Both IQAir HealthPro Plus vs. GC Multigas are equipped with useful extra features. For instance, they come with six fan speed modes and advanced settings, allowing different fan speeds such as daytime and nighttime speed for different periods.

You can also find their adjustable filter load indices useful because you can choose between three filtering modes for fine dust, chemicals, and large-sized dust. And thanks to their advanced timer feature, you can control these air purifiers’ operating hours with ease throughout the days.

Quick Rundown Of IQAir HealthPro Plus 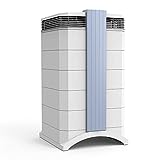 In general, though both IQAir HealthPro Plus vs GC Multigas have their pros and cons, it’s more advisable to opt for the latter. Despite its smaller coverage area and a bit higher price, it’s still ideal for those who want an air purifier with a compact design and optimal filtering capabilities for tiny chemicals, toxins, and odors.

Hot Topics You May Love: