When I first saw the Z8 coffee machine in the market, I immediately fell in love with it by its completely idealistic appearance. Therefore, in this comparison article between the Jura Z8 vs S8, my suggestion will be on the Z8 side.

Okay, you might think I’m too biased and not fair when the only factor I’m comparing is the design. But trust me, my favorite is based on fact and data! The features and functions of Z8 are so impressive that you will fall heads over heels for it.

In my opinion, there are no other Jura coffee machines that can beat this Z8 model. Let’s dive in and discover what is great about it! 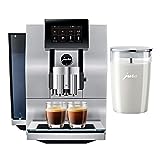 The outer appearance is the first factor that attracted me to the Z8. It has the best modern design and construction of a coffee maker I have ever seen in the market. The aluminium finish and a 4.3 inches touch screen add up the sleek silhouette vibe and allow users for a more convenient operation.

In addition, the water tank of Z8 is quite unique from other machines. It’s designed to be transparent and grooved for a bigger capacity that can store up to 81 ounces! The LED light inside the water reservoir also brings the fabulously pretentious design.

But due to this, the model is heavier and takes up more space than the S8 coffee makers. While the S8 tips the scale of 22 pounds, the Z8 weighs 7.5 pounds more, which is not a great idea if you’re looking for a portable gadget.

The S8 model has the same marvellous 4.3-inch touch screen where drinks options are represented as small icon images. However, the control panel of S8 is attached inside the machine while the Z8’s moves out to the front.

Personally, I prefer the construction of Z8 more since it adds a harmonious and spacious feeling to the design.

The milk frother’s position of Z8 is more convenient since you won’t have to lift the cup and move it each time brewing a drink.

Each coffee machine of Jura is very robust with 1450 watts. You won’t even have to doubt their ability in heating water and brewing coffee. For such a vigorous engine and double-serve capability, Jura S8 vs Z8 can offer users at least 10 coffee cups in about 15 minutes.

As for the capacities, Jura Z8 certainly wins this round. Its grooved water reservoir allows it to store up to 81 ounces while its competitor can only hold 64 ounces. It’s no doubt that the bigger, the better.

Here comes the factors that explain why I’m so crazy over the Jura Z8.

The first factor I want to mention is the number of presets and specialities. While the most advanced coffee machine of Jura has the specialities of up to 28 selections, the Z8 model already has 21 specialities.

Just by a flick of the finger, you can demand this gadget to brew any type of beverage you want – from pure espresso to the milk-based drinks of cappuccino, and sometimes even for green and black tea.

The second factor is the save Energy Consumption mode that reduces by up to 40%. The machine will automatically cut the unnecessary active electricity, such as shut off the machine after 10 minutes of unuse.

Other than that, Z8 has many advantages compared to the S8 model, namely the dual thermoblock heating system or the rotary switch for intuitive and simple operation.

Milk texture is the one advantage that I admit the S8 is better than the Z8 model. The S8 machine is released in the market later than  the Z8; therefore, its frother is newer and has higher professional quality.

Between Jura Z8 vs S8, the ultimate winner is undoubtedly the Z8 model! I personally favor the machine so much that after having it in my house, I plan to present my cousin this gadget! He owns a cafe and I reckon the numbers of presets will help him save lots of time.

Furthermore, letting this machine be the decorative object in the counter is not a bad idea at all. Trust me; It’s going to attract many potential customers!