Levoit LV-Pur131 vs Winix 5500-2 are always brought up for the efficient engine and basic design. They always manage to stick out from other products in the market.

When considering a quality air purifier, I can see the Winix 5500-2 has more advanced features and unique attributes than its competitor. It offers more filter layers, fan speeds, and an extra filtration mechanism that almost all households thrive on owning. Are you curious to know what that is? Let’s head on to the comparison table first. 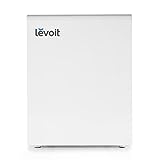 Even though the Winix is bulkier than the Levoit with 15 x 8.2 x 23.6 inches, it has a more open air intake grill, which is absolutely more efficient in purifying your indoor air.

The Levoit LV-Pur131, on the other hand, is more portable with 11.5 pounds – 3.3 pounds lightweight than its competitor. It might have an advantage in having a shorter height of 18.5 inches, but its intake air vent is pretty much blocked on the two sides.

And in fact, most users prefer the height of the Winix air purifiers since they don’t need to bend over too much to touch the button.

I’m not being favorable, but the Winix 5500-2 deserves a point

Both devices are intended for small to medium-sized rooms. When cleaning the air in a 360 square foot room, they work the fastest and most efficiently.

However, the clean air delivery rate (CADR) of Winix is 246cfm for pollen, 243cfm for dust, and 232cfm for smoke, while the Levit’s is 2 times less effective. It offers 131cfm, 101cfm, and 106cfm, respectively. This means it will take Levoit more than an hour to clean a 360 square feet room.

Therefore, in comparison to the room coverage, both models offer the same maximum covering areas. But in terms of speed and effectiveness, the Winix model surely wins in CADR and ACH data.

The Winix 5500-2 contains a 4-stage filtration system, while the Levoit is composed of 3 only.

First of all, both models share the same 3 layers of pre – filter, an activated carbon filter, and a true HEPA filter. They all work to reduce the fine dust particles, hair, pollen, molds, etc. however, the HEPA filter of Winix is given a massive boost when it comes with the Winix PlasmaWave.

Together, this combination forms Hydroxyl Radicals, which will wipe away all bacterias, virus particles, or chemical vapors in your indoor atmosphere. These pollutants will then convert into water vapor or harmless air molecules as a result of the process.

With this advanced feature, we surely prefer the Winix 5500-2 over the Levoit, don’t we?

When it comes to noise level, no other product can beat the Levoit LV-Pur131 air purifier’s ultra-quiet sleep mode. It has such a quiet engine that no machines in the market can compete. If they can, then these machines are not as efficient in clearing the air as the Levoit air purifier machine.

Quietness is the key advantage of the Levoit family. With the lowest setting, it produces 27 decibels that are perfectly suitable for your bedroom or office. Meanwhile, the Winix is from a Korean brand that is known for its loud and robust engine.

Levoit is the best machine you can expect if you need a quiet air purifier.

The instruction in using an air purifier is hassle-free, especially with a Winix 5500-2 model. This machine comes with a remote control that gives customers a much more convenient experience. The Levoit machine is also compatible with controlling remotely, but it requires a process of app installation.

While Winix contains 5 buttons in the control panel, the Levoit has 6 options: an extra “display” indicator. Apart from the on/off button, we have a “mode” button in the Winix model, which is also a “sleep mode” and “auto mode” in Levoit. These two buttons serve the same purpose – automatically adjusting the fan power based on the sleeping time and indoor air quality.

The next button is the PlasmaWave technology of Winix which you can turn on/off manually. This is something a Levoit LV-Pur131 purifier does not have.

The last two buttons are the “fan speed” and “timer.” Winix has 4 speeds: low, medium, high, and turbo, while Levoit air purifier has only 3. The timer indicator will demand the machine to auto shut off after 1 hour, 4 hours, and 8 hours of running.

Between Levoit LV-Pur131 vs Winix 5500-2 air purifier, which one is your favorite option? Each of us will find the advantages and disadvantages of each product since we have different influencer factors.

You would like to purchase the Winix 5500-2 if you have some severe allergy and asthma reaction due to indoor pollutants remaining in the air. The machine can easily solve this problem with its PlasmaWave technology.

However, if you require a good sleep while maintaining good current air quality, the Levoit LV-Pur131 with the quietest engine in the market can add some help.