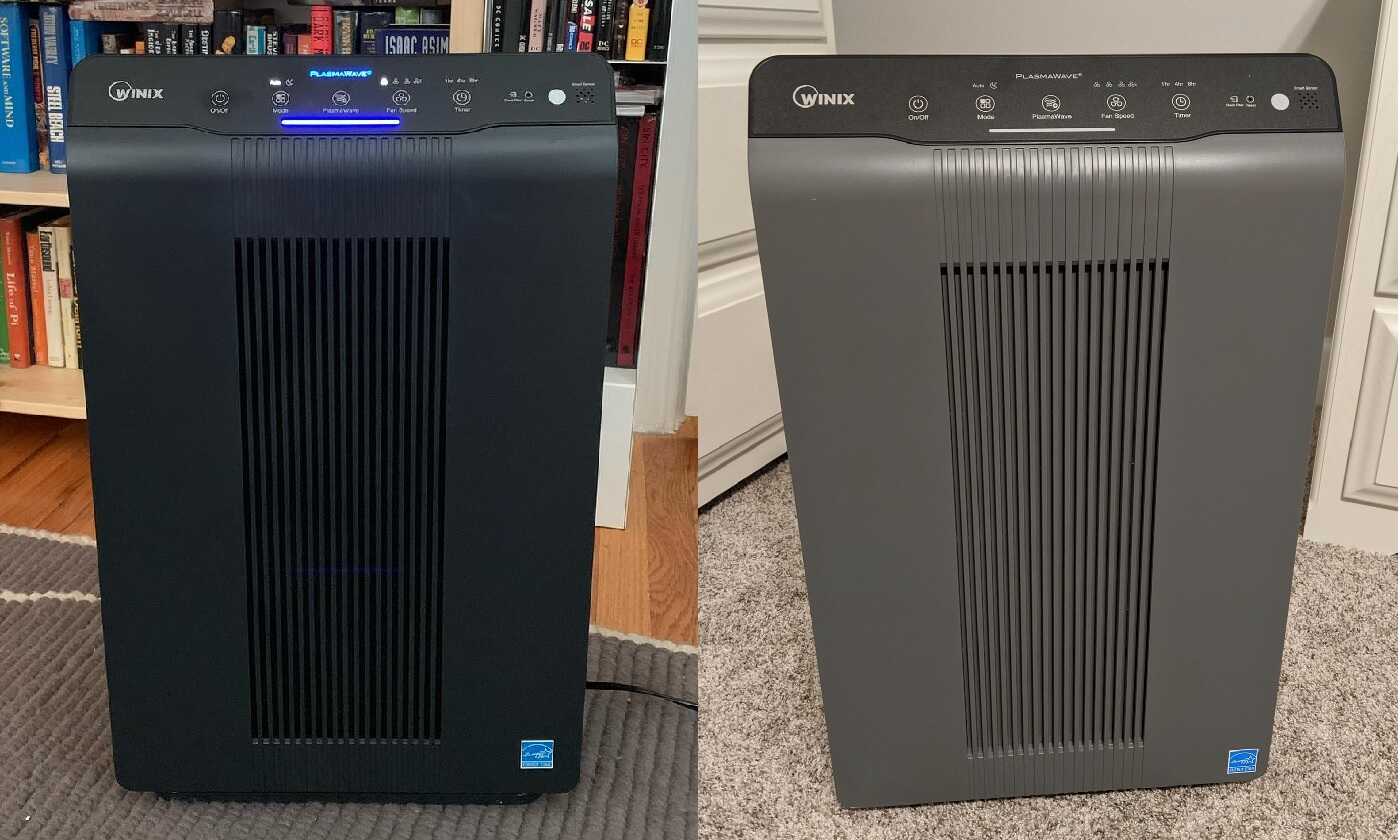 The 5300-2 and the 5500-2 are both among the best-selling air purifiers of Winix. From the same series of purifiers made for medium to large rooms, the differences between these machines are very subtle and hard to spot. But with my Winix 5500-2 vs 5300-2 comparison, you can know why there is a difference in price between them.

It’s not easy to tell these air purifiers apart only at first glance as they have an almost identical look.

Both the 5300-2 and 5500-2 keep the compact bottom-to-top design of most Winix air purifiers.The dimensions of these air purifiers are both 15 x 8.2 x 23.6 inches, making it easier for you to put them beside your work desk or tuck them close to a wall of your room.

On top of that, these air purifiers come with a new control panel. Older Winix models usually have control buttons on the front of the machine – not really a user-friendly design as you have to kneel in order to reach and press the buttons. But on the 5500-2 and 5300-2, these buttons have been moved to the top.

(For a detailed comparison of previous models, check out my Winix 5300 vs 5500 article.)

The only difference in the look between these models is that while the 5300-2 has a gray color, the outside of the 5500-2 is completely black.

These air purifiers both make use of a 4-stage filtration system, which consists of:

The pre-filter is designed to work against large particles in the air. It is extremely simple yet crucial in reducing the workload of the filters after it and protecting the system from getting clogged up.

But the part that does most of the filtering when it comes to bacteria and fine particles is the HEPA filter. Also known as High-Efficiency Particulate Air, this is an effective system that can trap 99.97% of airborne allergens, including smoke, microbes, pet dander, dust, mold spores, and pollen.

The last line of defense is what Winix calls PlasmaWave technology, which produces hydroxyls to reduce viruses and bacteria in the air.

Up until now, you may not see any difference between these air purifiers, but there is actually a small improvement on the 5500-2. Like most other models on the market, the 5300-2 uses common flexible and thin carbon filters, which work totally fine in most settings. But with the 5500-2, Winix provides an AOC (Advanced Odor Control) layer, which uses more advanced activated carbon granules to capture a larger amount of odors.

Again, there is no big difference in room coverage between these Winix air purifiers. Designed for medium and large living spaces, the 5300-2 and 5500-2 can both filter air in an area of up to 360 sq. ft. – the typical coverage for this price point.

The CADR ratings on these machines are 243, 246, and 232 CFM for dust, smoke, and pollen respectively, which I must say are impressive since anything at 200 CFM can already protect you against irritants.

Winnix says that the 5300-2 and 5500-2 have the same noise level of 27 dB. But keep in mind that this is just the minimum value. In reality, these air purifiers typically make a sound of 28 dB.

Given that they are more powerful than previous models while not becoming any louder, this is actually an impressive improvement from Winnix. If you plan to run these machines in your office or bedroom, you won’t be bothered by any annoying noise.

These two air purifiers both have an air quality indicator, an Auto Mode, and smart sensors that can detect the airflow and automatically adjust its fans and indicator lights.

But on top of that, the 5500-2 comes with a remote control that has buttons for fan speed, Auto and Turbo modes, and the power switch.

So in this Winix 5500-2 vs 5300-2 matchup, which air purifier comes out on top? I must give the winner title to the 5500-2, and the reason is simple. For a couple of dollars more, you can have a more advanced activated carbon filter and the convenience of remote control.

Hot Topics You May Love: